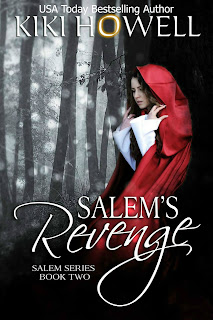 In this sequel to the Amazon Bestseller, Hidden Salem, the story resumes one year later, another present day October, in Salem, MA. Filled with the same cross of pagan and paranormal elements, as well as suspense and occult horror weaved into Book One in the Salem Series, Book Two also contains touches of romance, giving readers a sweet addition to the spells and rituals.

Denise Daniels came to Salem, MA to be in her best friend, Makayla’s wedding, but her matron of honor duties find her confronting more than she bargained for. In her first moments in Witch City, she’s greeted by a corpse used in a gruesome reanimation ritual.

Without warning, the final week of wedding preparations becomes mixed with a quick introduction to Wiccan practices, including necromancy used to communicate with the dead, as attacks by a mysterious, new coven seeking revenge increase. Denise soon becomes immersed in things she never expected, including automatisms—drawing elaborate pictures of two women in red cloaks in the woods—a pretty impressive feat for a girl who has only drawn stick figures prior.

As Denise tries to find her place in this world of magic, she discovers her own connection to the Salem of 1692. And, while losing the battle to save her heart from a romance that can never be, she ends up fighting to save her life. 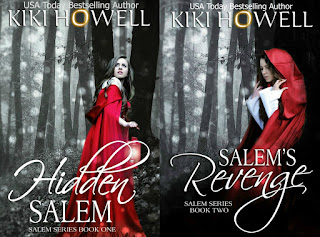 Reviews:
"One of the things that i loved so much about this book was the attention to details to the coven and their practices. Being a pagan myself i have taken part in my fair share of rituals and also read a lot of books and laughed at the outrageousness of the rituals but Kiki Howell has managed to get the details correct and also explaining why things are done a certain way, with a deep respect for the people of this faith, this seriously impressed me and make me like her as an author even more that she has taken the time to really research and make it so realistic in the novel." Amazon 5 Star Review

“This was a great witch story. More emotional and scary than the first book. While I was reading it was feeling a little overwhelming with the vivid narrations… Definitely, this was a book that you can’t put aside.” Amazon 5 Star Review

“I enjoyed the combination of Denise and Makayla - their discovery of their lineage, their passion for the practice (although different levels) and their obvious love for each other (I feel jealous of their sisterly relationship). It's quite a novelty when a story revolves around strong women who manage to save themselves.
Like Hidden Salem, the way the story unfolds is equally fast-paced and nail-bitingly exciting. I hope this is not the end of Salem stories!” – Amazon 5 Star Review
Newer Post Older Post Home