At War in the Willows, Novella Series 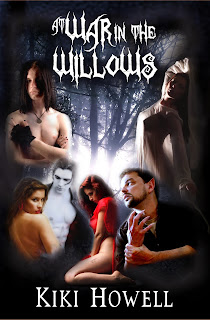 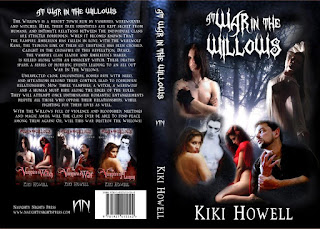 The Willows is a resort town run by vampires, werewolves and witches. Here, their true identities are kept secret from humans, and intimate relations between the individual clans are strictly forbidden.

When it becomes known that the vampire Amberlyn has fallen in love with the werewolf Kane, the tedious line of their co-existence has been crossed. Caught in the crossfire of this revelation, Drake, the vampire clan leader and Amberlyn’s maker, is killed along with an innocent witch. These deaths spark a series of horrific events leading to an all out War In The Willows. 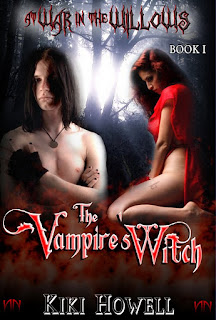 In Book 1, Amberlyn’s vampire brother, Isaac, always one to kick ass first and deal with the consequences later, kidnaps a witch, Winter. He intends to find out what type of retaliation the witch clan is planning against the vampires and werewolves. In doing so, he finds so much more then he bargained for. 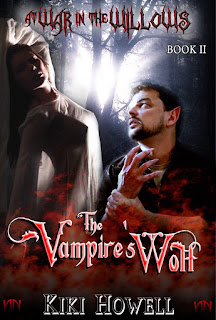 By Book 2, Isaac and Winter devise a plan to try to get the Elders of the clans talking peacefully. But, things don't go as they'd hoped, and the fighting between the clans becomes more devious - deadly. Now, Devin, another Vampire of Drake's making, steps in to help pick up some of the pieces as his sister, Amberlyn, fights to be with the werewolf, Kane. 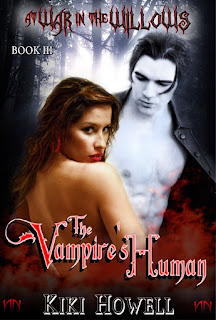 When Book 3 begins, it is Devin who hides the biggest secret; he’s in love with a local human. In a moment of desperation – of love – Devin sweeps this human, Sara, away to his home in order to keep her out of harm’s way.

Unexpected close encounters, bodies ripe with need, and situations beyond their control lead to forbidden relationships. Now three vampires, a witch, a werewolf and a human must ride along the edges of the rules. They will attempt once unthinkable romantic entanglements despite all those who oppose their relationships while fighting for their lives as well.

With the Willows full of violence and bloodshed, meetings and magic amiss, will the clans ever be able to find peace among them again? Or, will this war destroy the Willows?

CURRENTLY OUT OF PRINT

“Midwestern writer Kiki Howell is both beautiful and talented and she knows her way around this bailiwick of sci-fi/paranormal/romance adventures.

Kiki has the gift to make the abnormal seem `normal' ... Her characters are so varied in types and yet so well painted with her pungent language that they seem like acquaintances...

Love (all manner of), terror, death and un-death, the personalities of vampires Amberlyn, Drake, Isaac, and Devin, werewolf Kane, witches and more fill these pages in a manner that is addictive. There is enough lust to keep the reader stimulated and enough skullduggery to satisfy the most particular of devotees. If you are into this strange world, Kiki Howell is the leader.” ~5 Stars from Grady Harp, Amazon Hall of Fame, Top 100 Reviewer

"*Sighs* Forbidden love, is there anything more romantic than that?! I think this is the most romantic novel I've ever read. So obviously I have a very weird view of romance since this trilogy is full of action and crazy witches and other supes who love to stir the crazy pot, but the love between the main characters in each story is amazing! True love cannot and should not be stopped because of physical differences between two people. I thoroughly enjoyed this trilogy, and definitely recommend it!" -5Howls by Emi at Bitten by Paranormal Romance

" I really enjoyed At War in the Willows...it kept my attention. Each story in At War in the Willows built upon the last and got better and better. I would definitely read more by Kiki Howell. I loved that each relationship was forbidden, there is just something about forbidden love. I also liked that each couple had the strength and resolve to deal with all the controversy they were causing. I can't say that I have a favorite character in the series because they were all delightful. I enjoyed all the twists in the plot..." -5 Roses by Isis at Sizzling Hot Books

Reviews for Book I, The Vampire's Witch

“This is the first adult book I've read by Kiki Howell. And it was delicious! Good plot, great characters and sexy enough to raise the temperature in my house about 20 degrees... It's a very fast read, only about 50 pages. But it's a real page turner!” ~4/5 Stars by Lilac Wolf

“Ms Howell weaves a spell binding web that ensnares the mind and lets the reader drift away in to another world. I highly look forward to the next two books in this series!” ~4/5 Stars by Phoenix Johnson

“This is a sexy but short vampire and witch story which takes place in the middle of an upcoming war between three species. I can't wait for the next book in the series.” ~ 4 Stars from Linda Tonis, Member of the Paranormal Romance Review Team

“This is the second book in the series and picks up exactly where the first when left off… This is a short story with explicit sex.  I can't wait for the next book to find out what Devin's story is and to continue learning about Isaac and Amberlyn.”~ 4 Stars from Linda Tonis, Member of the Paranormal Romance Review Team
Full Reviews from Paranormal Romance Review Team at http://www.paranormalromanceguild.com/reviewskikihowell.htm