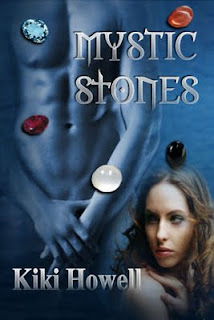 Blurb: Throughout history, many have believed in the magical powers and healing properties of gemstones. In Mystic Stones, the skeptical are forced into believing by their own needs and desires.

Because of the gemstones they possess in Aquamarine Love, Nadia's desperation could lead her to her destiny; in The Stone Hex, an old witch's curse could ignite the first sparks of attraction between Rachael and Gabe; in A Witch's Protection, attraction could save Emaline from torture at the hands of the witch-finders; and in Sexual Healing, love may save David and Catherine from themselves.

In these stories of sex and redemption, witches and ghosts--the characters will tug at your heart and arouse your passions. Become enchanted with the mystical powers of the gemstones while being swept away by the romances of those in their mists?

"Author Kiki Howell provides four steamy short stories with a particular central focal point--the magic of stones. This anthology displays a nice array of settings and the heroines and heroes bring a lot to the table with their different scenarios. Sexual ebb and flow keep the paces moving and the pages turning." Natalie, I Read Romance Reviews 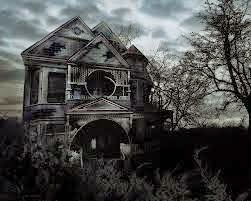 I wrote this Vignette as a short prequel to “The Stone Hex” published in this anthology.
Cursed, A Vignette:
Head held high, her black dress taunted the earth with each breeze. A silhouette of a woman stood statue still under the frail protection of a fall tree line where the trunks stopped and opened to an expanse of tightly-knit, burnt out grass. Dying leaves, the first of the season, scented the air, and accosted her dry nose with earthy smells of mold as a chill snaked down her back. The last rays of the sunset, low on the horizon, smudged the multi-colored scene, already rich in crimson and gold and green, yet whimsically layered with shades of cobalt and amber.
The debris of a yard, long unattended, rolled out before her until the twilight-drenched land gave way to the blackness of shadow. From her perspective, the long-abandoned house appeared to have scorched the land with its damned presence. The lack of symmetry of the two-story box of aged wood and cracking paint intimidated even with its weight shifted heavily to the left in a domineering stance. The house sustained the burden of a large fallen tree whose unbroken limbs seemed an elaboration of contorted fingers grappling for possession of the rolling wisps of clouds that muted the emerging moon.
The rotting porch which creaked with each gust of the coming storm, fell short where steps must’ve once been. Despite this, the ancient heavy door with rusted hinges gasped metallic shrieks, moved inches back and forth with each movement of the air, beckoned to a lost soul. The light-play of shadows on filthy and broken windows gave the illusion of specters. Reflections of peeling wallpaper or lost souls dancing? She couldn’t know. The flimsy aura of her curse, only a mist now, lonely and useless, existed without man or woman to rob.
Still, her power singed the air. Fine, dim silver threads waved over the ground, attached her to the cursed stone she’d placed under a floorboard in the entrance long ago. Accordingly, each object of her dark affections were planted now under the weathered headstones behind the house. Each year at this time, the anniversary of the last death, she came to taste the residual fears stuck in the ground.
This year, surely her last, she breathed in the decay of her deed, let the power of her revenge course through her, cold and exhilarating in some demented way. One last look she granted herself at the house, the pinnacle of her generations of dark spells. Dead twigs and unearthed roots held tight to its foundation, worshiped their dying god. Her maniacal laughter stirred the dead.
Newer Post Older Post Home