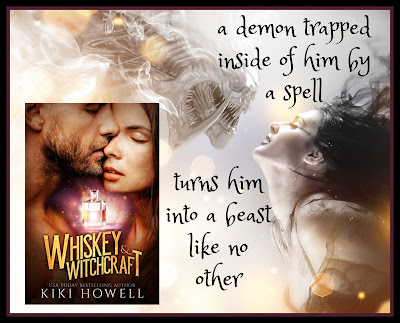 Blurb
Ciaran Byrne is suddenly thrust into the public eye as the face of the Byrne family by the death of his father, also inheriting his family’s scandals. Unfortunately, a legacy of misused magick runs like fire through his veins, and a demon trapped inside of him by a spell turns him into a beast like no other.

He knows no way around the demon failsafe his father had planted inside him. Still, over a decade later, he's convinced somewhere in him a better man lurks.

As if everything else isn't reason enough to keep his blood pressure high and his nights sleepless, Allanah Adams, the woman he’d once been forbidden to love, roams into his life.

He can see she assumes what the media tells her is true. He begs--no, orders--her to let him prove he can be different from his family, but can he prove it to himself and everyone else around him?

His heart skipped a beat, stopped a full, breath-stealing second, as if anticipating his death, before it began to thump again in his chest, hard enough to knot his stomach and build a throb in his head. He sucked in a burning rush of air, his lungs frantic for breath as his eyes widened, fixed on the source of the terror moving his way.

The crash of an ocean wave below echoed eerily through his home. An electric current raced over his skin the same moment the lightning of an impending storm lit the sky, reflected across the wall of windows in his great room, and blurred his view for a few lingering seconds. The heat of panic crawled over his neck as he waited for his vision to clear.

As he blinked his eyes in rapid succession, momentarily blinding himself, he hoped to eliminate what had to be an apparition of his drunken mind. Before he could stop it, a throaty burst of laughter escaped him as the need to move made his muscles jump despite the fact he remained frozen in place. If anyone paid him any mind, he didn't notice. His eyes focused in on the origin of his horror. Any attempt at false bravado dripped away like the sweat burning his neck, soaking the shirt on his back. He thought to take a large gulp of whiskey, desiring the curing of his dry mouth, erasing the unpleasant toxic taste left there. Only, he dared not move his trembling hand as he white-knuckled the glass in it, fearing it might slip from his clammy grip before reaching his quivering lips.

A California palm frond slammed against the window at his back, making his stiff body jump, his pulse tremble as he fought to catch his still sporadic breath. He stood rooted in place, couldn't move even if he wanted to. Still, his leg muscles tightened as if ready to run from the spectacular horror he faced, lied to himself that it must be a hallucination, drunken insanity bringing his past into the present. Healthy fear ignited all of his senses beyond the hissing sort of hum in his ears from his blood pressure, so high a heart attack imminently threatened his young, thirty-something, hours-spent-in-the-gym body. Clenching his free hand into a fist, he refused to let this split second in time be a measure of the man he knew himself to be. No man, no matter how powerful, how rich, how strong, and he was all of these things in spades, could endure such a terrifying experience.

"Why, Ciaran Byrne, you do look like you've seen a ghost."

Her voice, soft, yet deep for a woman, rushed over him, along with a measure of dark, unhealthy lust which fired from each nerve ending. He became acutely aware of every inch of the ethereal being standing before him. Of this world, not of this world, his senses still couldn't decipher which as his mind played tricks, attempted to dismiss the truth despite all facts and exquisite figures within his reach.

"Allanah Adams," he managed, the deep tone of his voice strangled, losing certain sounds almost completely as he'd struggled over her name. Though he sounded like a baffling idiot, he figured she knew her own damn name so he'd stop while he was ahead rather than humiliate himself further. Besides, embarrassment wasn't exactly familiar to him in any way. So, he had to swallow it down, crush it immediately, though the how-to on that remained as elusive as the next words he attempted to utter.

The smell of sweet vanilla and heady sandalwood, like an instantaneous aphrodisiac, intoxicated him more so than the whiskey ever could.
Home
Subscribe to: Posts (Atom)