Playing with Magick: A Necromancy Novella


This story was written as a challenge, part of cover artist, Jinger Bruton’s, Written Art Project. She created the cover, and I wrote a story inspired by it. What I ended up with was a psychological story, a paranormal tale of a witch falling apart in her grief, that includes every tiny detail of the cover somewhere in the story from the broken window to her glowing eyes. 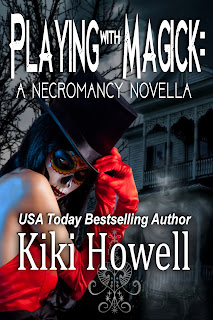 Blurb:  Amara, a powerful witch, loses the love of her life in a horrible accident. A month later, she’s finds herself still living in their 'fixer-upper house,' Kyle hadn’t gotten around to fixing up much before he died. While it had looked haunted before, now it truly is.

Her grief giving rise to something just short of insanity, Amara is hell bent on resurrecting her soulmate. She plans a mix of many spells, intent on achieving her goal, despite the echoes of her elders in her ears about how he will come back different, something sinister and dark. The ghost of her boyfriend protests the loudest among the voices swirling about her, pushing her even farther over the edge.

How far will she go? What lines she will cross, or not, remains to be seen as she is literally playing with magic.

Currently Out Of Print