Working Out The Kinks, A Short Story 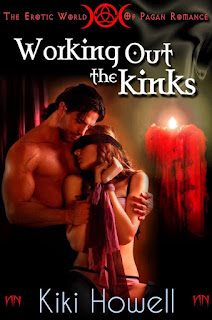 Making an appointment with his ex-girlfriend under a fake name, David buys himself one hour to get her attention. Hoping to apologize and remind her of their time together, he intends to do whatever he has to in order to make Meredith, a practicing Wiccan, forgive him for being idiot enough to have listened to those around him and choosing his political aspirations over love.

Will Meredith give in to David and put the past behind them?
Can David truly give everything he has ever known and strived for in order to be with his beloved witch?

CURRENTLY OUT OF PRINT

“Meredith and David’s journey was very intense and well very, very HOT! You can feel their emotions in this story and you want things to work out. The author, Kiki really knows how to pull at your emotions when she is writing. I felt David’s pain and Meredith’s anguish with their unique situation.”
~ Back of the Book Reviews

“Kiki has such a way of extracting deep feelings from her readers. Their (David and Meredith) journey of rediscovery was HOT, as well as tender and full of emotions. I enjoyed how Kiki captured the Wiccan elements and told them with much attention to detail…I love that after reading a story by Kiki I feel like, not only have I read a great story but I have learned something new about myself and a greater appreciation for all things Wiccan. On a scale from 1-10 I give Working Out The Kinks a 10. Ever since I read Torn Asunder, I knew miss Howell would be an author I would want to read over and over again. If you are looking for a great short story with actual feelings you can relate to and a love to hold on to and never let go of then this story is one you need to pick up”
~Raquel at Skyla11377
Newer Post Older Post Home