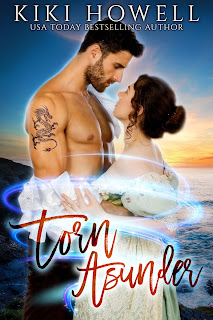 Blurb: Aubrey Griffen is a witch whose true reasons for coming to  soon fall to the wayside when she catches the eye of Edmund Bryant, the Marquess of Dalysbury.  He seduces her into a whirlwind romance until the lies and threats of his mother force her to flee to Triaill Brimuir, a secret island of her ancestors off the coast of . Edmund goes after her only to be hit by Aubrey’s confusion and anger when she magically transforms him into an elemental beast of her own creation.

However, it is when Edmund’s lust mysteriously turns him back into a man that the couple are forced to deal with a family secret and untold of powers.  Now, Edmund must learn to shift himself into the beast in order to save her in a battle of black verses white magic.

Fraught with scenes of explicit intimacy, romantic spells and mystical shapeshifting, Torn Asunder is a unique blending of the age of manners with sexual magic.


What a truly memorable and original novel! Torn Asunder by Kiki Howell is remarkable in its' depiction of a different time and age- and the adventures of Aubrey Griffen- a mystical and magical heroine. Torn Asunder brings to life the very essence of 19th Century and , and in doing so, provides the reader with the feeling they are actually there! Only a rare talent can accomplish this, full of magic, drama and romance, Kiki Howell joins the ranks of the very top supernatural writers!  ~A JAMES MASON COMMUNITY BOOK CLUB MUST READ, RICK FRIEDMAN, FOUNDER

Kiki Howell I feel has a major hit on her hands with Torn Asunder. I was so glued to this book that I was up til reading it, and mind you, I had to be up at to see my kiddies off to school....lol. I was just so captivated...In between all the chaos our couple must endure is the most breath taking love story. Their hearts and minds are linked for all time by an unforeseen connection that real couples only dream of.  On a scale of 1-10 I give this book a 10 and encourage everyone 18 and over to get a copy of this book and fall under Aubrey and Emund's spell. It is so worth the ride.  ~  Review by Raquel Vega-Grieder for Sinfully Tasty Reads


“Torn Asunder is what a Regency novel should be.  Prior to this book, I have never had a historical romance keep my interest for more than a chapter or two.  Kiki Howell has written a historical novel that sings.  Her love for the time period is reflected in every part of the story, from the vivid characters to the clear imagery of her settings.  I give Torn Asunder five of five hearts.”  ~D. Alexx Miller, Book Reviewer for Romance in the Backseat

Never having read any of Kiki’s books before, I was a tad unprepared for the exquisiteness of her story telling. The way she used colloquialisms that pertained to a period piece was extremely impressive. Kiki managed to convey the characters as real people, complete with flaws, which a lot of authors don’t always capture. I loved the way that Kiki was able to build up some steamy heat between the two characters without crossing over into modern terminology. Her descriptions of the settings were well done and not once did I feel that I could not imagine them in my mind and that is a big bonus. All in all it was a truly magical book and one I would be willing to read again! ~Vampirique Desire for Blood, Lust and Erotica