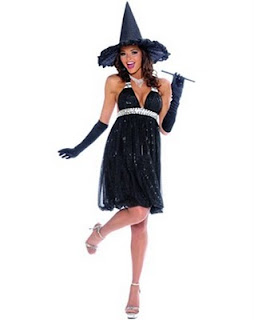 I have been given the chance to review the Woman’s Plus Glamour Witch Costume from Sexual Fantasy Boutique.  First off, I can say that in this exquisite dress you do feel just like the product description says, “bewitching.”  You feel as if you could cast a spell over, or enchant, the man of your choice. *giggles evily*  Ah, I could be one of my heroines easily.  Let's hear it for role-playing right?


On another note, the package arrived with extra-ordinary speed as well.
The short dress falls really well over all the curves.  For one often – believe it or not with what I do for a living – shy and self-conscious, it worked for me.  Besides, it is much cuter in person.  The picture does not show very well the beautiful tiny black sparkles all over the dress or the lay of the silver sparkles which adorn the empire waist and straps.  The halter had enough tie to feel that you were safe for it to stay tied, of course if that is what you wish. LOL  I loved the way the skirt kind-of bubbles around the knees, and the hat is made the same way.  A very cute addition, and unlike many costume hats, it actually fit snuggly on my head and stayed put.
I am always leery of the sizing with these things.  Being ever-around a size 14 myself, this dress actually fit, but it just fit.  So I would say it is close to true to size, but maybe a touch small as they do seem to run in my experience.  Just a word of caution on sizing, it in no way diminishes the outfit.  I am more than happy with it.  I think I feel another witchy, erotic story coming on.  Thanks for the inspiration :)