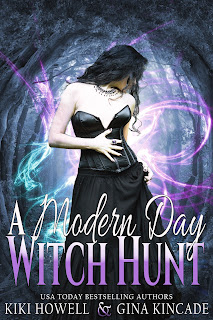 
Kamillia is an author of paranormal romances living in an upscale suburb of Cleveland, Ohio. Accused of being an actual witch by an ambitious group of businessmen with a dark agenda, she is surprised when she finds a man who resembles one of her fictional, alpha male heroes at her door offering his protection.

Luca is an immortal Watcher from the River of Light. Sent to Earth to help Kamillia, whose true heritage has yet to be revealed to her, Luca is caught off guard by the fighting spirit of the woman, and unnerved by the way his human body betrays him in her presence.

Research for her next novel requires Kamillia to travel to Salem, MA the week of Halloween, where she and Luca are forced to join together, overcome numerous obstacles, and conquer the evil of many centuries blocking a portal. Only then can she return to the problems awaiting her in her own city, with or without this stranger who has captured her heart but cannot share her future.